Padua in northern Italy is another one of those great cities with a beautifully preserved historic center. This is one of the oldest cities in Italy, dating back 3000 Years, founded way before the Romans; then during the Roman empire it became a very important city. In English, we say "Padua," Italians say "Padova."

The town has a wonderful historic center with parks, fountains, pedestrian lanes and loggia, accented by arcades and columns. It's very friendly to pedestrians and bicycles. People are pedaling all over the place here, and there are lots of sidewalk cafés, especially lively when the young people come out about 6 o'clock to 7 o'clock for drinks and conversation at the many fine outdoor bars.

We are going to focus more on the street life rather than historic sites like churches or museums, suggesting a walking route that will get you right around through the historic center of Padua and take you into the university district. The pedestrian zone is loaded with arcades, shops, bars and cafés, cobblestone and broad piazzas, and lots of people out having a good time.

Padua makes a very convenient day-trip from nearby Venice, which is just 24 miles away – it's about a half hour train ride.  Take the normal train and it will be quite inexpensive. You don't need the more expensive fast train. 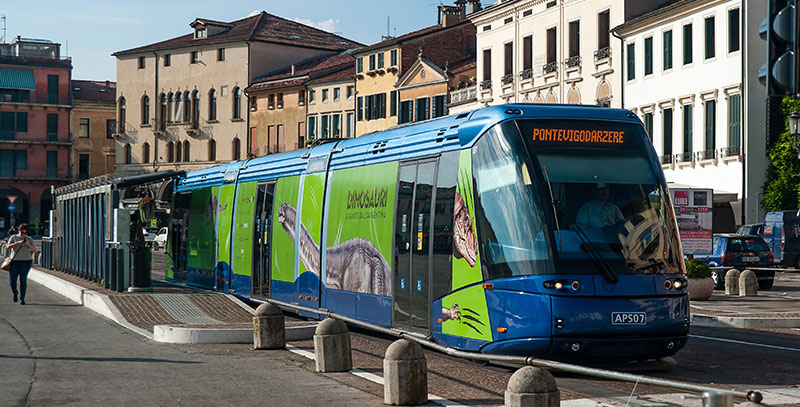 The train station is located in downtown, but not in the historic center – it's about a mile away. You can walk in a pleasant stroll along a busy commercial street, or you could take the tram or hop on a city bus. Padua's tram is relatively new having opened in the year 2009. Easy it is to board – it is right at street level as most European trams are. And you can buy your ticket from a machine right at the tram stop.

It just takes about 20 minutes on foot, so if you have the time, consider walking from the station to the center, and then later when your return to the station you can take the tram. You’ll pass a nice park along the way, called Giardini dell' Arena because the ancient Roman amphitheater was on this location, and traces are still there.

There are various other historic sites associated with Padua, especially the Scrovini Chapel with paintings by Giotto, that you will pass as you go by the arena garden. It is one of the great art masterpieces of Italy, well worth visiting inside.

Among many attractive elements of the city are the large number of arcaded streets, with the columns and the arcades overhead to protect the sidewalks and cafes from the rain and the sun, which makes an inviting pedestrian atmosphere. The historic center goes for about 10 square blocks, with a few cars and scooters, but for the most part, just for the people.

When you arrive at the pedestrian zone the first landmark you're going to see is Piazza Garibaldi with a column in the middle and some modern shops around it. The main pedestrian street here is Via Cavour and it extends right through the historic center with a Piazza Cavour on the side. Café Pedrocchi has been a cultural institution in the center for nearly two centuries, built in a neoclassical and Egyptian style.

Just around the corner on the right side you'll find the Tourist Information Office which has the usual assortment of brochures and a little free map, but if you want a good map you'll have to buy it at a newsstand. You will likely run into some fun street entertainment when you're out walking.

You'll find the main piazzas of town just one block over from that central pedestrian street. In typical Italian style there are people relaxing, talking, having a drink, nibbling on a snack and just generally taking it easy amidst the wonderful historic setting with some buildings going back 700 years.

City Hall is in the Palazzo Moroni, a grand Renaissance-style structure from the 16th century originally. It's got a 20th century façade and a courtyard out back which is the oldest part of the building.

In this central part of town there are two main piazzas, delle Erbe, and della Frutta, flanking the Palazzo della Ragione. Piazza delle Erbe is the biggest gathering spot of the city, the heart of town, punctuated by a grand fountain with a seating bench all around it, and grand buildings and cafés. There's been a food market on this site in the lower level in continuous operation for the last 800 years, and also inside running through it are two corridors with more shops. In the morning there is a large fresh produce market out in the piazza, and these interior shops are open all day. 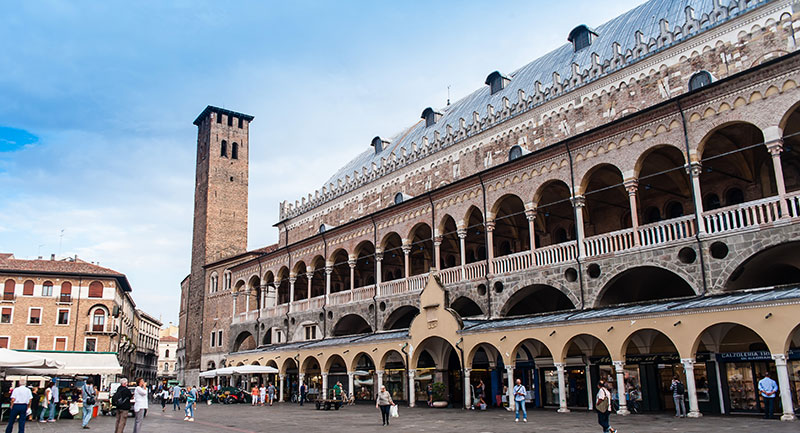 Towering above the piazzas is the colossal Palazzo della Ragione, with cafés and restaurants circling it at ground level, which extend into the three surrounding piazzas. Inside the palazzo, also called the Salone, you can walk through the Great Hall, which is reputed to have the largest roof unsupported by columns in all of Europe. They say it was the largest room constructed above ground level in the Middle Ages.

This great building was completed by the year 1219 and later that century Giotto painted frescoes on the wall.  However there was a great fire in 1420 that destroyed much of it. This current wooden roof was built and 300 fresco paintings were created in the mid-15th century depicting the apostles and the Virgin and signs of the zodiac. 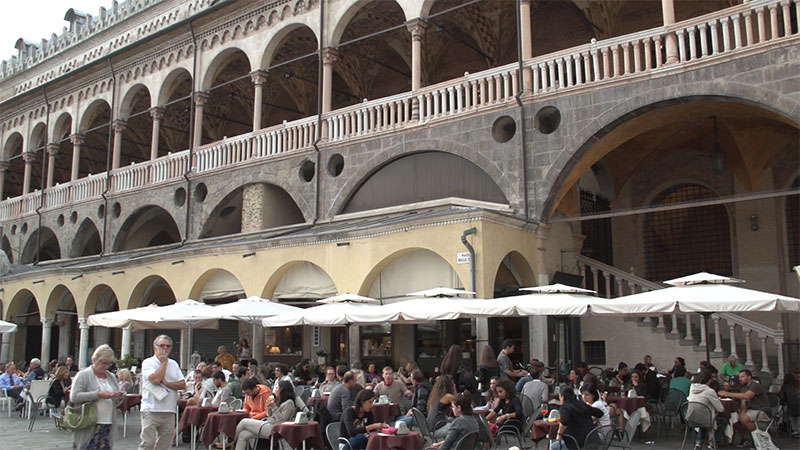 The highly decorated loggia were added to the building about a century later. The large wooden horse on display is about 500 years old and based on the bronze original by Donatelo. There's a lovely view from above and the grand staircase will lead you right back down into the Piazza delle Erbe.

The adjacent Piazza dei Signorione is another one of the major squares of town – with café tables in the middle and loggia arcades all around it, and bicycles going through, scooters, the occasional car. It's a wonderful peaceful spot. The Piazza gets busier later, between 7 PM and 9 PM, when locals come out to sit, have a drink, especially their beloved spritz, and maybe have dinner at one of the restaurants.

The Palazzo della Gran Guardia, with its broad staircase and columned portico, is a popular meeting spot, built for the City Council 500 years ago. Now it's a conference and exhibit center. The Capitaniato is home to an arts department of the University.

There are some helpful maps posted around town that will show you distances and directions, with circles showing what's in a five-minute walk from here and what's in a 10-minute walk.

The neighborhood of San Niccolo is a little off the beaten track for visitors, but it's a rewarding spot with little piazzetas and lanes with arcades over the sidewalk, all around the church of San Niccolo.

Via Santa Lucia is typical of the little back lanes that you'll find around the edges of the historic center. Again, this might not be on too many tourist maps but it's a pleasant stroll walking underneath the arcades and it's a little mysterious...what's around the next bend.

There are several side alleys that connect you back into the main piazzas of town, and you'll find small shops and a few cafés along the side alleys as well. In a few blocks you are back at the main Piazza delle Erbe. It seems like all streets somehow lead you back to this central location.

Now we are heading to the main street of the historic center, walking two short blocks down Via San Canziano to Via Roma, a wonderful walking street. It really is the main pedestrian lane of Padua, and while it is not a piazza, it functions as one because there are no cars allowed, and is usually filled with people.

It is wonderful how the character of the street is transformed when it's taken over by people? In this case they plop down a sidewalk restaurant right in the middle of the street – no problem because there are  no cars coming by. 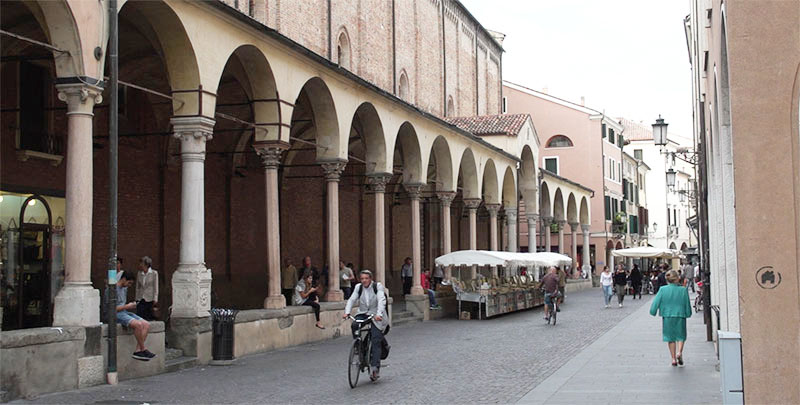 There are so many arcaded sidewalks that one more loggia might just seem normal but in this case it's the façade of the church, Santa Maria dei Servi, and the interior has one of the most incredible Baroque altars anywhere in Italy. The entrance is easy to miss, it looks just like another door, but it's worth popping inside for a moment.

The old Jewish ghetto  is an extremely well-preserved historic neighborhood that extends for several blocks on the west side of Via Roma.

This leads into an academic neighborhood along Via VIII Febbraio, with some buildings of the University of Padua, the second-oldest university in Italy and the world's fifth-oldest surviving university. The school was was founded in 1222, and now there are 65,000 students attending this busy university.

You might even come upon one of the frequent graduation ceremonies that are held for small groups throughout the year, with a celebration in the street.

If you have a little more time in your visit to Padua, explore that neighborhood just east of Via Roma along Via San Francesco and some of the other side lanes. It's very historic and here too you'll find additional pedestrian lanes.

Conversion of these neighborhoods to the pedestrian zone started in Padua back in 1990, and naturally it's been gradually expanding ever since, and that's the typical pattern that you find in many of the historic cities of Europe. The old convent of San Francesco is just another block along the street.

Via Zabarella is typical of the side lanes, shared by pedestrians and bicycles and the odd car – but look at these three bicycles using their mobile phones, one, two, three – not supposed to do that while driving, but this is Italy.

Slightly out of the center, but worth a walk, is the magnificent Basilica of St. Anthony. This important church is one of Padua’s most famous landmarks, a huge structure blending Gothic, Romanesque, Baroque and Byzantine influences, with large domes towering above. Located on Piazza del Santo, about 800 meters south of the Piazza delle Erbe.

When done with your visit to Padua you can catch the tram right back to the train station. It's about one mile so you can walk it, but by now you're probably kind of tired, so it's nice to get on this tram, very quick and smooth. You'll reach the station in five minutes.

This assumes that you're not staying overnight in Padua, which you don't really need to do. You can easily see Padua in a half-day or if you like a full day and return to your home base, which is most conveniently in Venice, just a half an hour away by train. 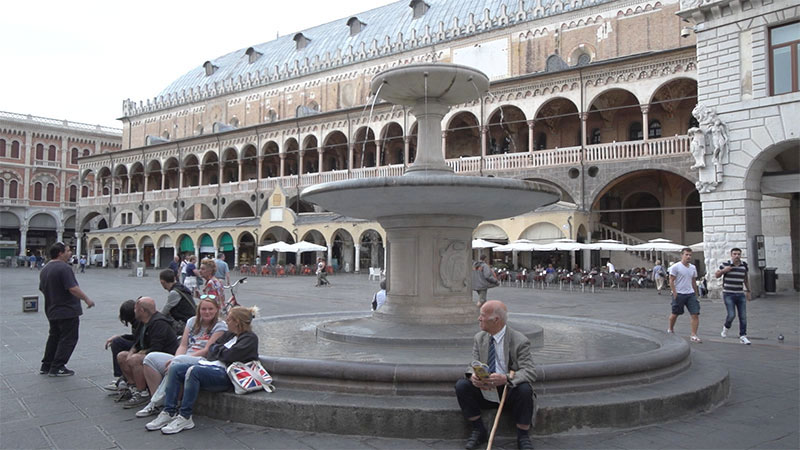 However, if you have time, it would be lovely to spend a night or two in Padua to explore beyond the historic center into the surrounding parks and visit a few of the many museums.

It is very simple to buy your train ticket at the station using the machines. In this case it's under five euro for the one-way trip back to Venice and they will take credit cards or cash. They have a grand piano set out so anybody can just sit down and start playing and entertain you.

Stazione di Padua is one of the biggest train stations in Italy with 11 platforms and more than 450 trains a day passing through, including some of the high-speed trains that connect Venice with Milan.

You don't need to catch one of the high-speed trains back to Venice because the regular speed gets you there and just about the same time and it's a lot cheaper, with frequent service. In just 30 minutes you're back in Venice.